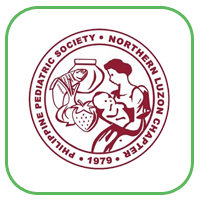 The Philippine Pediatric Society Northern Luzon Chapter (PPS-NL) was organized on September 28, 1979 under the guidance of the late Dr. Perla Santos- Ocampo, then the PPS National President.

The chapter’s first official logo depicts a woman dressed in a Filipino costume carrying a baby. On the left, was a figure of the rice terraces that were carved mountains of Banaue, Ifugao, by the ancestors of the indigenous people. The Banaue Rice Terraces was once designated as one of the “Eight Wonders of the World”.

When it started in 1979, the PPS-NL was initially composed of the following Provinces: Pangasinan, Baguio-Benguet, Ilocos Sur, Abra, Isabela, La Union, Mt. Province, Ilocos Notre, Cagayan Valley, Nueva Vizcaya. Within a number of meaningful years of PPS-NL, the Chapter had been graced with exemplary leaders who embodied not only strength, and integrity but also benevolence and love for children.

The PPS had withstood the test of time and has remained undeniably steadfast because of the resilience of its leaders who embodied the Chapter’s credo: Excellence, Professionalism and Moral Integrity.

Its first president, Dr. Eliza F. Ramos (1979-1981), started Child Advocacy Day on December 1980. It was also in the same year where a Charity clinic was opened. During this time, Dr. Rolando Songco was a regular Scientific lecturer. In 1981- 1982, it was Dr. Irene M. Dimalanta’s turn as PPS Northern Luzon President. It was during her time where there was increase in the number of recruited members from Baguio and Benguet. It was also during her term where Scientific Meetings and Community oriented projects were started.

In 1984- 1986, It was during the term of Dr. Manuel B. Antolin when RESYNET was held in Tuguegarao and Baguio City. It was also during this time where the PPS president and some board of directors joined the chapter members, who served as instructors to the participants of RESYNET. In 1986- 1988, with Dr. Maria Herminia B. Cariaga as the PPS N-NL president, the RESYNET program started with courses on fluids and electrolytes, the initial discussions of which eventually became the program on “Control Diarrheal Diseases”

From 1988-1989, during the term of Dr. Estrellita J. Uson, the Community projects of the Chapter, in consonance with the projects of Department of Health, were started. Scientific meetings were continued. In 1889 -1991, during Dr. Agnes A. Bautista’s term as President, the region was fraught with challenges as it was during her term where occurrence of major calamities such as the July 16, 1990 earthquake and floods had severely affected many families. It was during her term where the Chapter undertook rehabilitation efforts for these calamities. She was also then the PPS National Representative for Luzon.

In 1991-1993, PPS-NL was headed by Dr. Hazel A. Balbido. During her term, the Pediatric Residency Research Contest was initiated. It was also during this significant time where the five (5) residency training hospitals were accredited by the PPS. These Hospitals were Ilocos Regional Hospital, Baguio General Hospital, Don Teofilo Sison Provincial Hospital, St. Louis University Hospital and Cagayan Valley Regional Hospital. The PPS-NL under the banner of Dr. Estela G. Mingoa, launched the community project “Operation Kalusugan”. She was also able to acquire accreditation for the Department of Pediatrics of Mariano Marcos Memorial Hospital and Medical Center and the commencement of the first PPS Northern Luzon Residency Scholarship Program, which allowed aspiring pediatricians to be admitted and trained in the pediatrics residency program.

Within the span of Dr. Mardave Martinez’s term in 1994-1995, he fortified a myriad of network through the enhancement of the society’s membership. Various scientific meetings were conducted in different provinces throughout Northern Luzon. One of the mission statements of the Association is to provide leadership in training, teaching and research, and expertise in medical and community aspects of child health. It was during Dr. Wilfreda Villanueva’s term in 1995-1996 when this mission statement was realized through the effective implementation of the periodic hospital case presentations, quarterly resident’s review fora, regional written evaluation examinations for training residents, and research fora. She also established a plethora of programs that enhanced child and infant care and support which are known by many as: Down Syndrome Parent Support Group, RF/RHD Prevention Program and the Preventive Nephrology Program in partnership with the Department of Health. Dr. Nelly S. Simon was the first and only Chapter President from Cagayan. She implemented the Resident’s Review Forum and Astra Circuit Course. She also continued the lectures conducted by Dr. Rolando S. Songco a well-renowned pediatrician in the country.

It was in 1998-2000, during the term of Dr. Susie Castano where pediatricians from Region II separated from the PPS-NL Chapter and organized their own PPS North Eastern Luzon Chapter. It was during her term which was regarded as the transition period of the Chapter, wherein she continued the thrusts of the PPS-NL. Her successor, Dr Aurea D, Matias (2000-2002) bagged the award “Most Outstanding Chapter in Child Advocacy”. In the advent of her term, the first PPSNL directory concomitant, with the revision of the constitution and by-laws, was written and published. She spearheaded the CME Activity known as PPS goes to Abra, and made a mark on different communication platforms. She was involved in the broadcasted television show “MEDISCENE”, as well as hosted the Radio Program DWRS in Vigan City. In so far as the community service is involved, she implemented the “Adopt a Barangay” in Tagaytay, San Juan, Abra, and held the Synchronized Community Outreach Program in Bangued East Central School, Abra.

The 25th Anniversary of the Chapter was celebrated during Dr. Jeisela Gaerlan’s term in 2002-2004. It was during her time that opened doors to a plethora of scientific workshops such as NALS, PALS, IMCI, PPS Modules and UMED lecture series. Her penchant for community work was exhibited through the various community projects she had led, like her project “Piso Para sa Batang Ilokano”, a fund-raising activity the proceeds of which was used to finance community projects. In the culmination of her term, the ITRMC was awarded the 2004 PPS IMCI Advocacy award because of the multitude of monthly themed activities which are patterned with the DOH’s various health programs. Dr. Nieves Macaranas (2004-2006) initiated the PPS Community Program “Kalusugan ng Kabataan, ating Kinabukasan (KKK)”, a medical home program for the entire community. During her presidency, she was able to continue the “Adopt an Orphanage” Project.

Dr. Marvin Callanta (2006-2008) was the first president who made use of modern technology by using the internet as a means of information dissemination and notifications to the members. He created the “Eliza F. Ramos Award” which is given to outstanding PPS-NL members who showed exemplary performance, and also initiated funds for research projects. Dr. Ma. Elena C. Lahoz’ (2008-2010) incumbency had made major changes and numerous accomplishments for the Chapter such as the revision of the PPS-NL Constitution and By-laws, the launching of the new PPSNL logo (seen below) and directory, and the PPS-NL scientific lectures with PPS CME units. She was also the president when the association celebrated its Pearl Anniversary.

It was in Dr. Eliseo Laron’s term where an esteemed professional in the field of pediatrics, Dr. Jeisela Gaerlan, had been awarded the “PPS Most Outstanding Pediatrician in Community Service” in the year 2011. Dr. Rainelda Runez ((2012-2014), aside from continuing the community services and child advocacies of the Chapter, started PPS-NL Scholarship. Royette Cuyo from Ilocos Sur, was chosen to pursue his dream to be a Medical Technologist for free. Video conference was also started to reach out to other doctors who cannot physically attend the meeting.

Under Dr. Gerry Acosta (2018-2020), he continued the YOLO Program by his predecessor, which further tackles bullying, drug addiction, smoking, and teenage pregnancy to elementary students. YOLO 2 was also added and focused on mental health, suicide prevention, depression, and screen time for teenagers. Another version of YOLO (Rated PG) focused on parents rearing. Other advocacies include: PEDIAs (Parents, Educators, Doctors in Action Symposium), Annual Flu Immunization for neurologic patients and children with special Needs, Plogging (jogging with picking up of litter to raise awareness of environmental health, Reach Out And Read (ROAR) in cooperation with Ambulatory Services, Hands Only CPR, Bulilit/ Teen Health Workers, Global Latch on, Nutrition Program for Disaster, Teenage Pregnancy and Adolescent Programs, Dengue and Tobacco Prevention, among others. It was also during his term when the PPS-NL held its 40th Year Celebration. He ended his term with a Plaque of Appreciation granted to the Chapter for a decisive and responsive action during the measles outbreak. Presently, as the Chapter is overwhelmingly burdened by the Covid-19 pandemic under Dr. Efren V. Balanag’s term, the legacy of the PPS -Northern Luzon, to uphold the care of Northern Luzon Child to utmost level, lives on…